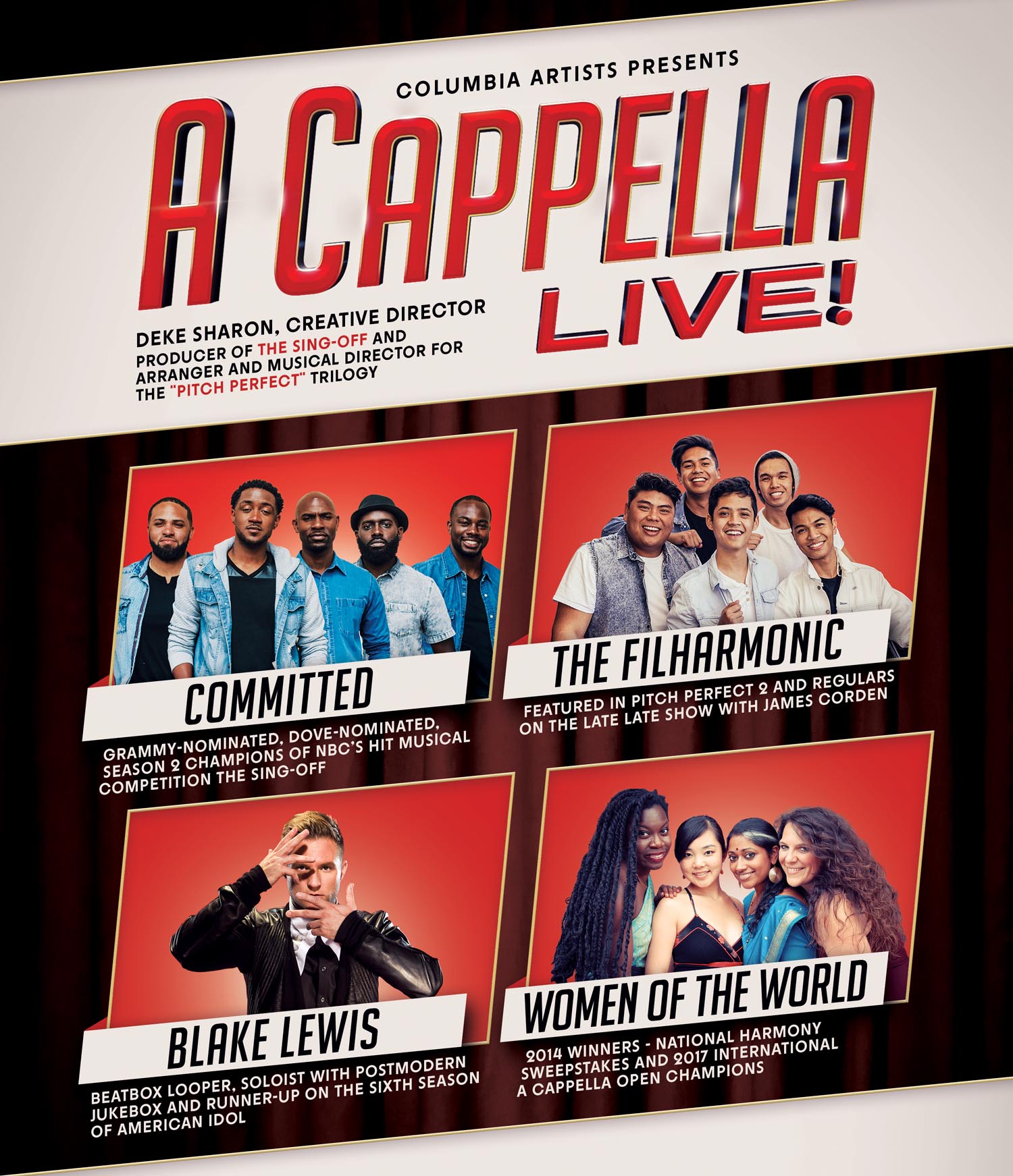 Featuring Committed, The Filharmonic, Blake Lewis & Women of the World

Committed is a Nashville based Award winning musical group comprised of 5 talented young men. They emerged as the Season 2 champions of NBCs hit musical competition The Sing Off which reached 9 million viewers weekly. They released a self-titled album and a Christmas EP which has led them to be nominated fora Grammy, Dove, Stellar, and NAACP Image Award. For over a decade Dennis Baptiste, Geston Pierre, MauriceStaple, Robert Pressley, and Theron Thomas have been traveling the world sharing their harmonies, teaching workshops, and using their influence to make an impact in various communities.

The Filharmonic With Los Angeles as home base, we now present you with The Filharmonic, a band unique in their musical talent and cultural diversity. The Filharmonic, an a cappella group of Filipino-American youngsters who were featured in NBC’S hit musical competition, The Sing-Off, has much to sing about. The 5-piece vocal group made the semifinals, joined The Sing-Off national tour, and were featured in the Universal Pictures hit movie, Pitch Perfect 2, then became a viral sensation after their Late Late Show appearances. In 2016, The Filharmonic brought their unique blend of hip hop, pop and 90’s nostalgia to more than 150 stages nationwide and was named the #1 college booked entertainment group of the year. They consist of vocalists Vj Rosales, Joe Caigoy, Trace Gaynor, Vocal Bass Jules Cruz, And Beat Boxer Niko Del Rey. What started as friendly chance encounters at singing competitions in college eventually solidified into a harmonious group as the boys discovered their shared genuine chemistry, unparalleled love of music, and undeniable musical talents.Through social network and a strong kinship to their Filipino culture they have found their niche in the musical community. Though their passion for great music is on par, their combined talents come from a wide variety of backgrounds in the performing arts industry, including pop, a cappella, jazz, opera, theater, classical, etc. Together they honor their Filipino heritage through incredibly nuanced musical performances that are both moving and fun to experience. Currently, the boys can be found working hard on their music, videos, and doing what they love most: simply performing. Ultimately the group aspires to work with the greatest in the music industry for the greatest audience in the world: you. To this end, they invite you to join them on this amazing journey they’ve embarked on as they work joyfully and tirelessly at their art.

Blake Lewis first came to national attention as one of the most unique contestants ever to compete on American Idol, and long before that, as a teenager, he was well-known as "B shorty" in Seattle's a cappella, hiphop, and rave scenes. But with the release of his ambitious and completely independent third album, Portrait of a Chameleon, Blake is taking things to a whole new level.The follow-up to the critically acclaimed Audio Day Dream (which sold 350,000 copies and spawned the top 40single "Break Anotha") and Heartbreak on Vinyl (the title track of which went to #1 twice on Billboard's dance charts), Portrait of a Chameleon is "fun, sexy, and positive. I'd call it 'future pop,'" says Blake. "Across the album, I juxtapose so many different kinds of music. It's very anthemic, and there's an epic feel. The album metaphor has to do with finding our colors, as we are all chameleons. I'm standing out on the cover because I've found mine. I will always continue to stretch the boundaries of the human voice and create the music that colors my life."Using Blake's own painstakingly handcrafted library of sampled mouth sounds ("beatboxing, sound effects, vocal scratching, the works") as its foundation, Portrait of a Chameleon runs the gamut from the reggae-tinged Nick Hexum co-write "She Gives Me Her Love" to the horn-laden funky-freshness of "Disco in Space," from the sexy slow-jam "Lost in Heaven" to the poignant life-on-the-fringe cautionary tale "Not Today," the latter inspired by Blake's mother, whom he considers his main inspiration. The album also features the hard-hitting, bass-in-your-face "Your Touch," the soundtrack to 2013's Microsoft Internet Explorer 10 campaign — which starred Blake, played on more than 19,000 theater screens across the U.S., received more than 1.2 billion impressions, and has already sold 130,000 copies worldwide. But perhaps the centerpiece of Portrait is the '80s-tastic pop epic "Retro Romance." A sonic sequel of sorts to"Heartbreak on Vinyl," the frothy, feel good ode to a Jordache-clad dreamgirl with "Suzanne Somers thighs"sounds like a final-love-scene song on a John Hughes soundtrack — meaning, of course, that it sounds totally awesome. "Duran Duran, the Cure, Depeche Mode, Prince, and Michael Jackson were always playing when I was growing up, on CD or on vinyl," Blake says fondly of his proud '80s influences.However, Portrait of a Chameleon — out on Blake's on Audio Day Dream Records and distributed throughInGrooves — still has a hypermodern feel, and Blake is looking ahead, hoping that his "future pop" will connect with fans of all ages. "So here we go/A chance to start again/The melody is calling me/There's no time to pretend," he boldly declares in the album's opening track."I never wanted to stick to one style or stay in one place," Blake stresses. "And I haven't been more proud of anything in my life than this album."

Women of the World was formed to bring women musicians from across the globe onto a common platform to collaborate and create through the sharing of music, to explore and celebrate the differences in ideologies and cultural tenets that exist in the daily lives of women all over the world. Ayumi Ueda, a Berklee College of Music alumna from Japan, sought to create a multicultural ensemble that not only crossed boundaries musically, but one that was also committed to the daily practice of peace in their daily interactions. Ayumi joined forces with like-minded vocal artists, Giorgia Renosto from Italy, Annette Philip from India, Debo Ray from USA/Haiti to manifest this vision. The Women of the World repertoire is thus, vast and varied. Constantly searching for new genres to explore, the group has performed in 34 languages (and counting) including Bulgarian, Cuban, Ladino, Brazilian,Turkish, Kenyan, Haitian, Indian, Italian and Japanese music.In many ways, the ensemble is a microcosm of the world. Each of the musicians has a strong artistic identity shaped by the culture in which they grew up, and each finds endless excitement in learning and exploring the many cultures of the world. The unique music which stems forth from this cross-pollination of genres, rhythms and global sounds is thus borderless and spirited, carrying the undeniable message of unity.Through their work, Women of the World created a stir in the community, receiving support from renowned artists such as Grammy-award winning maestro, Bobby McFerrin. They went on to share the stage with African vocal icon, Angelique Kidjo, and the Boston Pops Orchestra led by maestro conductor Keith Lockhart. 2018 winners of the Ward Swingle Award at Vokal. Total (Graz, Germany) 2017 world champions of theInternational A Cappella competition OPEN by Varsity Vocals, 2014 Harmony Sweepstakes National champions, nominees of the 2013 Boston Music Awards and 2014 Independent Music Awards, Women of the World has extensively toured North America, Europe and Asia. Women of the World continues to serve as cultural ambassadors of peace and unity through music and has delighted audiences at venues like Carnegie Hall, Blue Note Jazz Club, Boston Symphony Hall, the Kennedy Center, The Apollo Theater as well as through collaborations with the United Nations, amongst others.Channeling the power of collective action, Women of the World has brought together over 200 women from all over the globe believing in their music, in their bond as a family of artists, and in peace.

Part of the John Turner and Jerry Fisher series