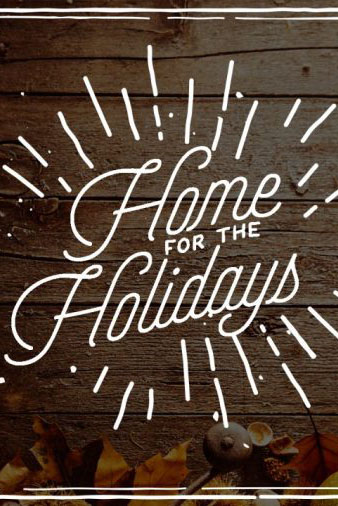 9th Annual Home for the Holidays

9th Annual Home for the Holidays

Singer-songwriters from Louisiana will perform while “home for the holidays” - celebrate their successes and see what’s coming up next in their careers!

This event held between Christmas and New Years has become a holiday tradition. The event was started to shine light on our Louisiana singer-songwriters that are living in Nashville working hard to make it in the music business and allowing them to play their latest original music to their friends and family while “home for the holidays”. Having some of the same artists each year has given Baton Rouge music lovers a chance to follow these artists’ careers and see the changes from year to year.

The show starts at 7:30 pm and there will be two Nashville-style songwriter rounds of music. There will be drink specials including a featured Firefly Moonshine and champagne cocktail. The lobby bar will open at 6:30 pm.

Kree Harrison - Kree Harrison, runner-up on Season 12 of American Idol, was born and raised in Woodville, Texas, but she has a connection to Baton Rouge (JasonMartin). Check out this quick synopsis of her career to date:At three, Harrison asked her pastor if she could sing during church. The request was accepted and after she sang, her pastor commented, "I was expecting Jesus Loves Me, but she belted out El Shaddai by Amy Grant. I knew then this child had a special gift."Over the next several years, Harrison sang for churches, rodeos, weddings and competitions. At eight, she was the opening act for R&B performer Percy Sledge. At nine, she won "Artist of theYear" from Kirbyville Playhouse, and at ten, she sang on The Rosie O'Donnell Show and was invited back on three other occasions. Harrison scored a development deal with Lyric StreetRecords at ten, which resulted in her family moving from Woodville to Nashville.After two years with Lyric Street she parted ways with no music being released due to creative differences. Harrison began writing her own songs at the age of fourteen and often found herself in writing sessions with Nashville's hit writers. At sixteen, Harrison landed her first publishing deal with Crysalis Records. She performed across local venues in Nashville such as the legendary Bluebird Cafe, as well as BMI showcases in Florida, such as the Key WestSongwriters Festival and the Sandestin Music Festival. She also sang backup vocals on Kacey Musgraves' album, "Same Trailer Different Park", and Eli Young Band's album,"Life At Best."In 2015, Harrison released her debut record "This Old Thing" with Plaid Flag Records. She has since signed a new record deal with Visionary Music Group and is set to release a new singleJanuary 2019 and a new album mid 2019.

Jason Martin - As soon as Jason Martin starts to speak, it's easy to hear that the rock and roll singer songwriter hails from south Louisiana. "If you ain't living life on the edge, you're taking up too much space", Martin says while taking a drag of a cigarette. Jason Martin is a Nashville based rock and roll artist/singer songwriter. Growing up, Jason's dad, Harold Martin Jr., taught him to play guitar and sing at the age of 14. By the time he was 16 Jason was playing in cover bands throughout the southeast, honing his skills as a guitarist and a songwriter. In late 2010Jason started releasing his music to the public. Now, at the age of 33, Jason is breathing a breath of fresh, rock and roll air into the heart of Nashville TN. With the recent release of his debut LP, Alcatraz, Martin will be on tour throughout the US in 2018 and 2019.

Kylie Frey - Accolades for hard work seem to follow the Louisiana bred spitfire, and you may just see her on a brand new country music TV series! This chart-topping singer/songwriter, who just so happens to have spent years competing in the rodeo circuit, is celebrating her nationally recognized single, featuring Randy Rogers, “Too Bad”, which recently became her second #1 on the Texas Regional Radio charts. “Too Bad” is the first single released from Frey’s forthcomingEP. The song is produced by Paul Worley, a Grammy, CMA, and ACM Award winning producer, who also produced for Lady Antebellum, Dixie Chicks, Martina McBride, and many other country giants. The song is, also, getting airplay on Sirius XM’s The Highway.Tony Ardoin of River Road produced her first EP, which cranked out two Top 10’s and her first#1 “Rodeo Man” on Texas Regional Radio Report Charts. The now 23-year-old has respectfully been nominated for “New Female Vocalist of the Year” and “Female Vocalist of the Year” at theTexas Regional Radio Music Awards, as well as her video, “The Chase, has been nominated for“Music Video of the Year”. It was her first ever debut single that enjoyed an impressive 28 weeks on the Texas charts.

CJ Solar-From the inception of the series 9 years ago, Baton Rouge’s CJ Solar moved toNashville, attended Belmont University where he graduated with a Bachelor of Science inSongwriting, and signed a publishing deal with Sea Gayle Music (a company co-owned by BradPaisley). He has had his songs recorded by Jerrod Niemann, Justin Moore, Morgan Wallen/Florida Georgia Line, and others. This past year, he celebrated his first #1 as a songwriter when“UpDown” recorded by Morgan Wallen featuring Florida Georgia line topped both the billboard and media base charts. The song, also, was RIAA certified gold & platinum. As an artist, his sophomore EP, “Get Away With It” was released on Sea Gayle Records in April. The first single,“Airplane” was one of the highest charting singles for an independent artist, and his current single, “American Girls” is proving to do the same. You can see why Rolling Stone Country has named CJ one of the 10 New Country Artists You Need to Know.

Rhett Anthony - Rhett has, also, been a part of the series since the inaugural year. He is a native of Prairieville and lived in Nashville for over 10 years. During the course of the songwriter series, Rhett signed a publishing deal with Ole Music Publishing, worked for M-Pact MusicGroup, and performed as the house band at Nashville’s iconic venue, Losers. Rhett now callsLouisiana his home base again, but he keeps the road hot playing in Nashville & Las Vegas atLosers, corporate events around the country for M-Pact; but now you can see him more inLouisiana either performing solo or with his new band, Sugar Shaker. Rhett has one of the best voices around - if you haven’t heard it...well, you need to be here!

David Borne’ - Son of Dan Borne’, the voice of tiger stadium, David studied business administration & finance at LSU and then moved to Nashville. David’s EP, “Break My Heart” was released independently and debuted Top 5 on the iTunes Singer/Songwriter chart, and top 10on the Billboard South Central Heatseakers chart. David has been hitting the road hard touring this past year, while still making time to write new songs... which you will hear some of them at this show!

‍
All patrons, regardless of age, must have a ticket to attend performances. Please carefully consider whether a performance is appropriate for children before planning to attend.