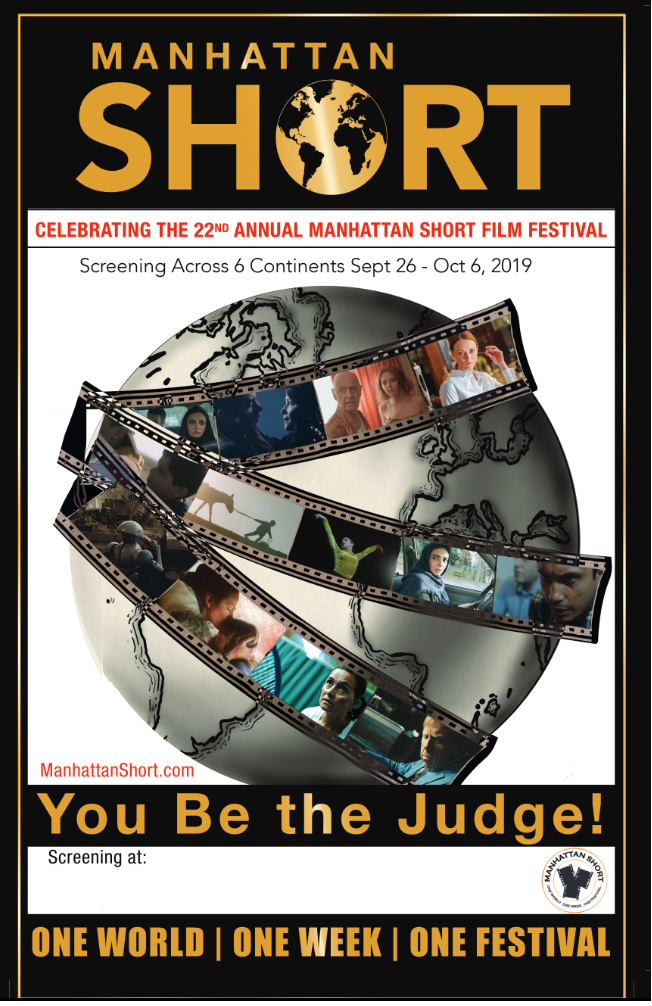 Over 100,000 film lovers unite in over 400 venues across 6 continents to view and vote on the finalists films in the 22nd Annual MANHATTAN SHORT Film Festival. The Final Ten MANHATTAN SHORT finalists hail from seven countries with films from France, Iran, Canada, Finland, and Germany alongside two films from USA and a record three from the United Kingdom. These Final Ten films represent the best short films from among 1,250 submissions from 70 countries received by MANHATTTAN SHORT for 2019, testimony to the enduring vibrancy and creativity of short films worldwide. By virtue of their selection by MANHATTAN SHORT, each short film is automatically Oscar-qualified.

For more information on the Manhattan Film Festival and the shorts being shown, click here.

Director: Yves Piat
Country: France
Time: 17:00
Synopsis: In Tunisia, two football-loving, young brothers find a donkey lost in the middle of the desert on the border with Algeria. But why is the animal wearing headphones over its ears?

Director: Julio Ramos
Country: USA
Time: 14:00
Synopsis: After a disastrous event on his construction site, Armando acts quickly to save his crew, but instead stumbles upon an unspeakable truth. Debris is an intense and visceral glimpse of the grim world of human labor trafficking.

Directed by: Marziyeh Riahi
Country: Iran
Time: 12:48
Synopsis: Local laws say Bahareh's husband must accompany her to driving lessons so she and her instructor will not be alone, a task made more complicated when the two men don't get along.

Directed by: Alysse Leite-Rogers
Country: Canada
Time: 13:48
Synopsis: A waitress at an upscale restaurant reaches her tipping point with a table of difficult customers and concocts a special dish of revenge.

Directed by: Richard Prendergast
Country: United Kingdom
Time: 16:53
Synopsis: Our love affair with the automobile means that a car can feel like it is part of the family. Sometimes it's more than that.

Directed by: Pia Andell
Country: Finland
Time: 15:38
Synopsis: Two middle-aged women turn a friendly game of tennis into an intense competition but stand united at the end of the match when they discover one thing in common.

Directed by: Adi Wojaczek
Country: Germany
Time: 14:00
Synopsis: Rejected by a famed dance school, Malou gets a chance to prove that she's destined for a career as a dancer despite the odds seemingly stacked against her.

Directed by: Magali Barbe
Country: United Kingdom
Time: 14:00
Synopsis: An elderly man lives as a recluse, haunted by his past and memory of the family he once had, until a non-human visitor arrives and disrupts his isolation.

Directed by: Florence Keith-Roach
Country: United Kingdom
Time: 13:08
Synopsis: When Annabelle wakes up alone in a stranger's bedroom on her 30th birthday, she thinks the day cannot get any worse. But then Bernard walks in and he is not the man of her dreams.

At The End of The World

Directed by: Fon Davis
Country: USA
Time: 13:08
Synopsis: In an apocalyptic future, a lonely government worker finds solace with a soldier during the last World War. But their future together is threatened when the soldier is sent back into battle.