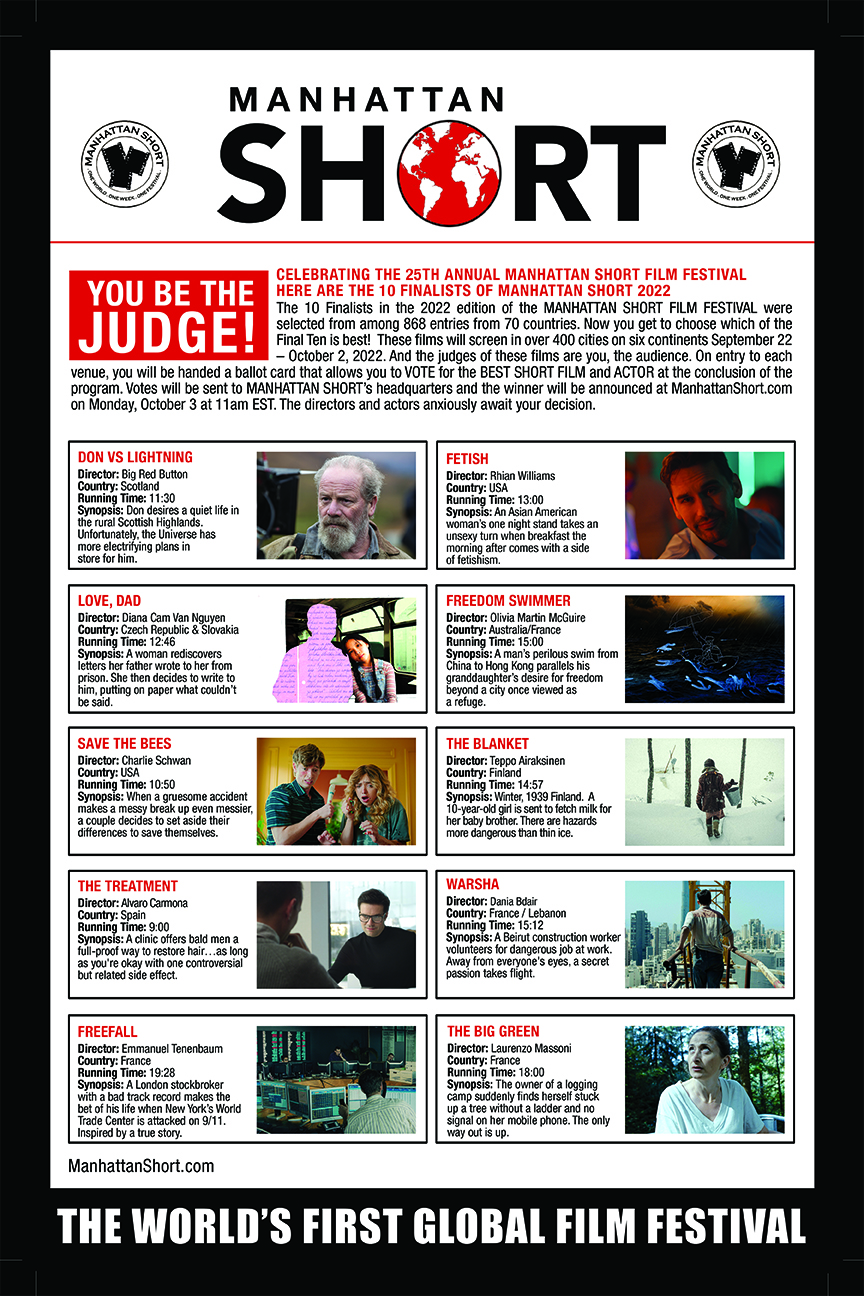 PRESENTED BY FILMS at MANSHIP

Film lovers will unite in over 500 venues worldwide to view and judge the work of the next generation of filmmakers from around the world when the 25th Annual MANHATTAN SHORT Film Festival takes place during September 22 to October 2, 2022. MANHATTAN SHORT is the only film festival of its kind. The Final selections screen simultaneously across the world during a one-week period, where attendees vote for Best Film and Best Actor awards at each participating venue. Every short film selected will automatically become qualified for the Oscars of 2023.

Directed by: Diana Cam Van Nguyen
Country: Czech Republic & Slovakia
Run Time: 12:46
Synopsis: A woman rediscovers letters her father wrote to her from prison. She then decides to write to him, putting on paper what couldn't be said.

Directed by: Charlie Schwan
Cast: Jackson Pace, Peyton List
Country: USA
Run Time: 10:50
Synopsis: When a gruesome accident makes a messy break up even messier, a couple decides to set aside their differences in order to save themselves.

Directed by: Rhian Williams
Cast: Jennifer Zhang, Joey Heyworth
Country: USA
Run Time: 13:00
Synopsis: An Asian American woman's one night stand takes an unsexy turn when breakfast the morning after comes with a side of fetishism.

Directed by: Olivia Martin McGuire
Cast: Anonymous
Country: Australia & France
Run Time: 15:00
Synopsis: A man's perilous swim from China to Hong Kong parallels his granddaughter's desire for freedom beyond a city once viewed as a refuge.

Directed by: Laurenzo MassoniCast: Jeanne ArènesCountry: FranceRun Time: 18:00Synopsis: The owner of a logging camp suddenly finds herself stuck up a tree without a ladder and no signal on her mobile phone. The only way out is up.

*Please be aware that some shorts may not be suitable for children.