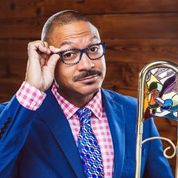 Delfeayo Marsalis (pronounced DEL-fee oh) is one of the top trombonists, composers and producers in jazz today. Known for his “technical excellence, inventive mind and frequent touches of humor…” (Leonard Feather, Los Angeles Times), he is“…one of the best, most imaginative and musical of the trombonists of his generation.” (Philip Elwood, San Francisco Examiner.) In January 2011, Delfeayo and the Marsalis family (father Ellis and brothers Branford, Wynton and Jason) earned the nation’s highest jazz honor – a National Endowment for the Arts Jazz Masters Award. Born in New Orleans on July 28, 1965, Marsalis was destined to a life in music. “I remember my dad (Ellis Marsalis) playing piano at the house, and me laying underneath the piano as a child, listening to him play. After briefly trying bass and drums, in sixth grade I gravitated towards the trombone, which was an extension of my personality. .” Early influences included J.J. Johnson, Curtis Fuller, Al Grey, Tyree Glenn, Tommy Dorsey and Ellington’s trombone masters.

Marsalis attended the New Orleans Center for Creative Arts high school, was classically trained at the Eastern Music Festival and Tanglewood Institute, and majored in both performance and audio production at Berklee College of Music. He earned a Masters degree in jazz performance at the University of Louisville and was conferred a doctorate by New England College.

As a composer and arranger, Delfeayo has always shown a flair for the dramatic. His debut CD Pontius Pilate’s Decision (1992) was inspired by biblical tales, and 2010’s stunning Sweet Thunder gives the Duke Ellington/Billy Strayhorn suite Such Sweet Thunder a modern day makeover. Rather than merely recreating the classic work, which is comprised of musical depictions of characters from William Shakespeare's plays, Marsalis took the work as a point of departure for his octet, creating fresh and new music with inspired performances. Sweet Thunder earned a place on numerous top CDs of the year lists and wide critical acclaim including 4 stars in USA Today and 5 stars in the Financial Times. Marsalis also created an original theatrical jazz production, Sweet Thunder: Duke & Shak, which toured widely in 2011. He recently served as Music Producer for the upcoming film Bolden!, a mythical account of the life of Buddy Bolden, the first Cornet King of New Orleans.

Marsalis has also been long involved in work as an educator. To inspire New Orleans youth through arts education, Delfeayo founded the Uptown Music Theatre in 2000 and has implemented its Kidstown After School in three New Orleans grammar schools. Delfeayo released Live at Jazz Fest 2011 with The Uptown Jazz Orchestra, and in 2014, he took the group to Africa to perform at the Standard Bank Joy of Jazz event. In addition, he has composed over 80 songs that help introduce kids to jazz through musical theatre and has reached over 5,000 students nationally with his Swinging with the Cool School soft introduction to jazz workshops.