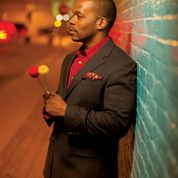 Warren Wolf is a multi-instrumentalist from Baltimore, MD. From the young age of three years old, Warren has been trained on the Vibraphone/Marimba, Drums, and Piano. Under the guidance of his father Warren Wolf Sr., Warren has a deep background in all genres of music.

Warren has several recordings as a leader. Warren’s first two records are on the M&I label which is based in Japan. The first record is titled “Incredible Jazz Vibes” which features Mulgrew Miller on Piano, Vicente Archer on Bass and Kendrick Scott on Drums. The second record is titled “Black Wolf”. That record features Mulgrew Miller on Piano, Rodney Whitaker on Bass and Jeff “Tain” Watts on Drums. Warren has a self produced CD which is titled“RAW”. That record features Darren Barrett on Trumpet, Walter Smith on TenorSaxophone, Jason Palmer on Trumpet, Plume on Alto Saxophone, Kris Funn on Bass, Peter Slavov on Bass, Lawrence Fields on Piano/Fender Rhodes and Charles “Dogg” Haynes on Drums. On “RAW” Warren performs on both the Vibraphone and Drums. The fourth recording is titled Warren “Chano Pozo” Wolf. On this recording, Warren performs on the Vibraphone, Drums/Fender Rhodes and Piano. This recording features Tim Green on Alto Saxophone, Lawrence Fields on Piano/Fender Rhodes, John Lamkin on Drums, Dana Hawkins on Drums, Kris Funn on Bass, Louis Cato on Electric Bass, Delandria Mills on Flute, Tabreeca Woodside on Vocals and Integriti Reeves on Vocals. Warren has recently signed to the Mack Ave recording label. A future record will be released in the near future.