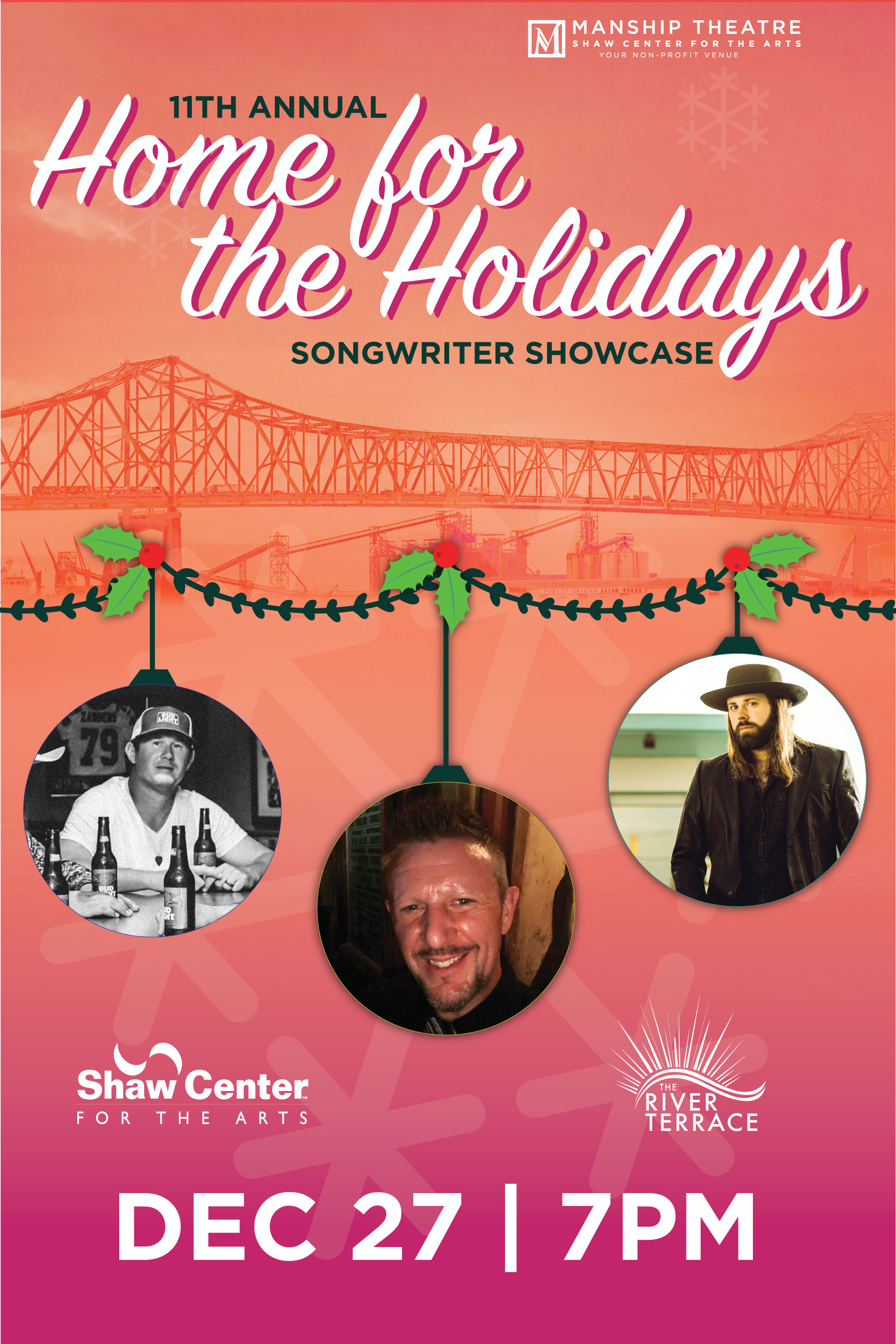 The 11th Annual Home for the Holidays at the River Terrace

The 11th Annual Home for the Holidays at the River Terrace

The 11th Annual Home for the Holidays

Singer-songwriters from Louisiana will perform while “home for the holidays” - celebrate their successes and see what’s coming up next in their careers!
This event held between Christmas and New Years has become a holiday tradition. The event was started to shine light on our Louisiana singer-songwriters that are living in Nashville working hard to make it in the music business and allowing them to play their latest original music to their friends and family while “home for the holidays”. Having some of the same artists each year has given Baton Rouge music lovers a chance to follow these artists’ careers and see the changes from year to year.

Join us for our 11th annual home for the holidays celebration!

CJ Solar was born and raised in Baton Rouge, LA.  He moved to Nashville, TN 9 years ago to attend Belmont University and has been there ever since.  Just before graduating college, he signed a publishing deal with Sea Gayle Music which is co-owned by Brad Paisley.

As a songwriter, he had his first #1 last year for co-writing, "Up Down" which was recorded by Morgan Wallen and featured Florida Georgia Line.  Last month, the song was recognized as one of the 10 "Songs I Wish I'd Written" at the annual NSAI Awards.  CJ, also, co-wrote Jerrod Niemann’s Top 30 single “Blue Bandana” and The Regulars” on Neimann’s latest album as well as “Between You & Me” on Justin Moore’s last album. He also had writing credits on two Texas artists, “Damn Good Goodbye” on Mike Ryan’s new album and Kyle Park’s single, “What the Heaven,” which hit #1 on the Texas regional radio chart.  Jameson Rodger’s single, “Some Girls” currently at country radio was, also,  co-written by Solar and Jason Aldean just released 4 songs from his upcoming album including a track co-written by CJ, "I Don't Drink Anymore"/

As an artist, CJ has been named by Rolling Stone Country as one of the "New Artists You Need to Know" and was named “Independent Artist of the Year” at the 17th Annual MusicRow CountryBreakout Awards ceremony in February after having 2 of his own singles, "Airplane" and "American Girls" hit top 15 on the Music Row charts in 2018.  He was, also,  nominated this summer for Music Row Breakthrough Artist-Writer of the Year.

CJ has just wrapped up his latest project of 6 new tracks with the debut single, “Coming My Way” delivered to all digital platforms on August 16th and impacting at country radio on Sept. 30th.  He recently celebrated his debut at The Grand Ole Opry in September and has been opening shows around the country for Gary Allan, Chris Janson, and Hank Williams Jr. and was excited last year to open some select dates on Lynyrd Skynyrd's Farewell Tour!

Derek Shipley, lead singer of the popular country band, Parish County Line, is from Centerville, MS and now resides in Rosedale, LA.  The band was formed in 2012 as a 90's country cover band, but have now released 2 EP's of original music with a 3rd planned for 2021.  The latest EP, "Blame it on Jones" was recorded in Nashville, TN and produced by CJ Solar & Nick Gibbens.

Rhett has, also, been a part of the series since the inaugural year. He is a native of Prairieville and lived in Nashville for over 10 years. During the course of the songwriter series, Rhett signed a publishing deal with Ole Music Publishing, worked for M-Pact Music Group, and performed as the house band at Nashville’s iconic venue, Losers. Rhett now calls Louisiana his home base again, but he keeps the road hot playing in Nashville & Las Vegas at Losers, corporate events around the country for M-Pact; but now you can see him more in Louisiana either performing as a solo acoustic artist or with the New Orleans based band,  Sugar Shaker as guitarist/vocalist.  He co-wrote the song, “Where You Belong”  with D. Vincent Williams and David Borné which was recently released by country sister duo Presley and Taylor.  The song was produced by Keith Burns & James Stroud.